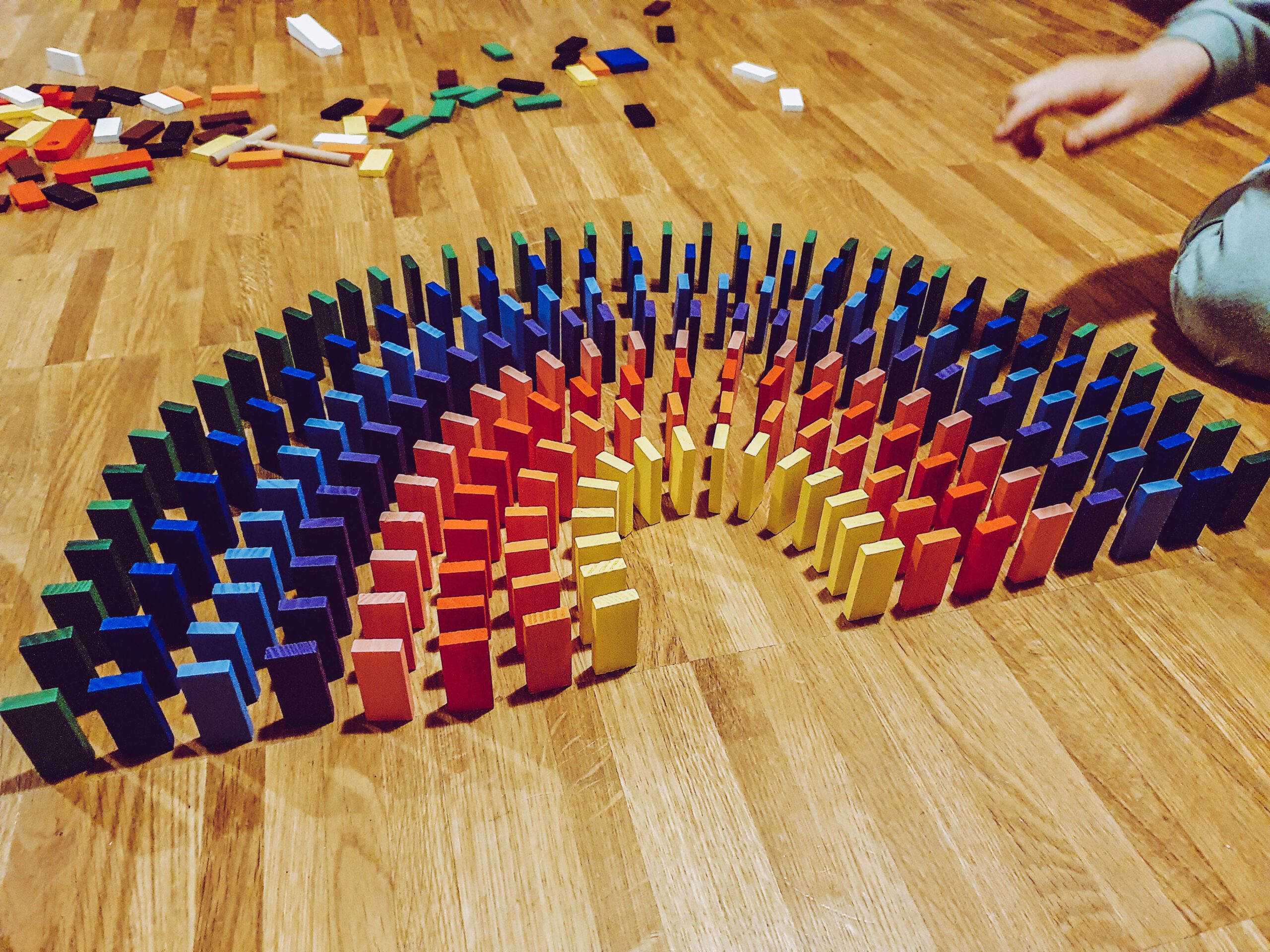 Our kids recently discovered Dominos and absolutely love them.

And it all started with a YouTube video. Now, while our kids are allowed to watch their shows on Disney+ or Netflix, YouTube is only allowed if we watch something with them. We showed them the squirrel video from Mark Rober, and they found it both interesting and entertaining, so from time to time we now watch videos on his channel. However, it was one specific video by Mark that led them to their current Domino craze.

In the video, it’s about him and a few guys engineering a robot that could place 100K domino stones faster than a human. The video featured Lily, who goes by the YouTube channel Havesh5. After Mark’s video, they asked to watch a few more Domino-related videos, so we jumped over to Lily’s channel and watched a few videos around the things she’s built with Dominos. They then asked if they could get a Domino set, and we agreed because we saw the educational value in them.

That is how all this started.

Now while you may think that lining up domino is something that really has no point to it aside from a few seconds of excitement watching them fall, well, we would like to point out a few things about what makes this a great activity and toy, especially on rainy days and something the family can come together and enjoy.

The educational value of building a domino chain brings along quite a few benefits, including;

That being said, everyone knows about chain reactions and building with dominoes, but engineering basic chains with elements is a great way to help kids take their skills to a new level when it comes to the aforementioned benefits of building with dominoes. Now, we don’t want to interpret too much into it, because ultimately it should be about fun, but the additional “side effects” of the above are a great plus why this is a great toy and activity.

Ultimately, this is a personal choice based on your personal preference. In most instances, when purchasing a set of dominoes to play with, they will either be plastic-based or wooden. We opted for basic wooden dominoes, as we prefer these types of toys over plastic, when possible.

We opted for the basic XXL Calmado domino stones edition, which is wood-based. There are a variety of sets from their series including the family edition, the XXL edition, and the grand edition to name a few.

While the woodwork on these are not super-premium, they are completely fine for their intended purpose. All the dominoes are cut flat and are easily placed on all sides. Our purchase came in a super-compact box that included a bag, a few additional elements (10 in total) to help create a fun chain reaction, and 370 domino pieces in a variety of colors.

After having played with these for quite some time, we feel comfortable reviewing them. You are easily able to build chain reactions, series, pyramids, stack them, and much more. They are small in size, and fairly light, so building structures vertically takes quite some patience and skill. The set also came with an instruction booklet that had a few tips and tricks along with ideas on what to build. Our kids actually replicated a few of these.

Alternately, if you prefer plastic-type toys, then there are a variety of companies and sets that produce these. Some higher ratings online point to Noris Domino Run stones, which are similar to the sets from Calmado, however in plastic. Having looked at a few videos before purchasing ours, the one primary difference that stood out between the two types of dominoes is the sounds when they fall. The plastic ones make more of that exciting “clunk” noise as they tumble.

Again, in the end, it’s a personal preference, however, we are satisfied with our wooden set. So far there is only one thing to point out, and that is when the box first arrived, the stones were sealed in a color-coded fashion in plastic wrap, however, maybe it was just our set but because of how they are packed some stones seemed to be “glued” together. Some were easier to take apart than others, and some you really needed to use a little force in order to detach them.

You could just say, here is a bag/box of dominoes, get to it and build. Alternatively, a great way to interact with your kids and give them the challenge to engineer something is by inspiring them to build something specific.

Give them simple ideas and as they get better, make them more complex. The intention is not necessarily for them to become domino masters such as Lily on YouTube, but to spur some thought in them about how they can build themselves through small challenges.

Here are a few thoughts:

Domino stones are domino stones. You can line them up, stack them, tilt them, etc., however with a few additional elements you can create really cool chain reactions. The best thing about including additional items is that it can really be anything lying around your house. From using a string to cutlery to a plastic cup or ping pong ball.

Our kids utilized their Jenga blocks, hot wheels toys like cars and tracks, along with a few other things to build their domino chain reaction. They additionally had a few elements that came right out of the box including larger wooden pieces, steps, elements that turn or roll along a track. These were part of the kit we purchased, and looking online there are a variety of elements that can be obtained.

We are very happy overall. Building with dominoes is a great way to enable your child’s skills, work together in a team, and a great way to spend some quality time together, especially when it’s cold outside or rainy.

It has been so much fun on some days, that we are pondering purchasing additional stones to allow our kids to build larger, longer chain reactions, but we will wait to see how often they actually continue utilizing this on a day-to-day basis. Either way, now having a bag with a good set of dominoes, we can always pull them out as an alternative to other activities.

Also, consider that the packaging on nearly all manufacturers says that this toy is suitable for ages 3 and up. So always keep an eye out, especially if you’re building and have younger toddlers about.

Tip: Here is a great trick to get started when setting stones up. If your child keeps knocking them over accidentally, before actually finishing what they intended to build them, help explain to them that they should build in sections. Placing 10 stones and then leaving a little gap before placing the next 10 will allow them to build a bigger series without causing everything to tumble in a “just in case” scenario. In that gap, they can lay down 1-2 dominoes flat, so they don’t run out of domino stones in the end and can’t fill those spaces they initially left. Hence, if they accidentally knock something down, they’ll only lose one section and not the whole thing.

Before we had any dominoes, our kids were using their Jenga blocks and doing the same kind of things. Kids will become very creative. Alternatively, if you have the domino game, the one with dots on them, then that is also a great place to start and see if your children enjoy constructing before actually purchasing a domino set.

In the end, many of these sets are not very expensive, and you don’t need 100K stones like in Mark Rober’s video. We purchased our introductory set online via Amazon. But do keep in mind to check local toy stores and support your neighborhood!