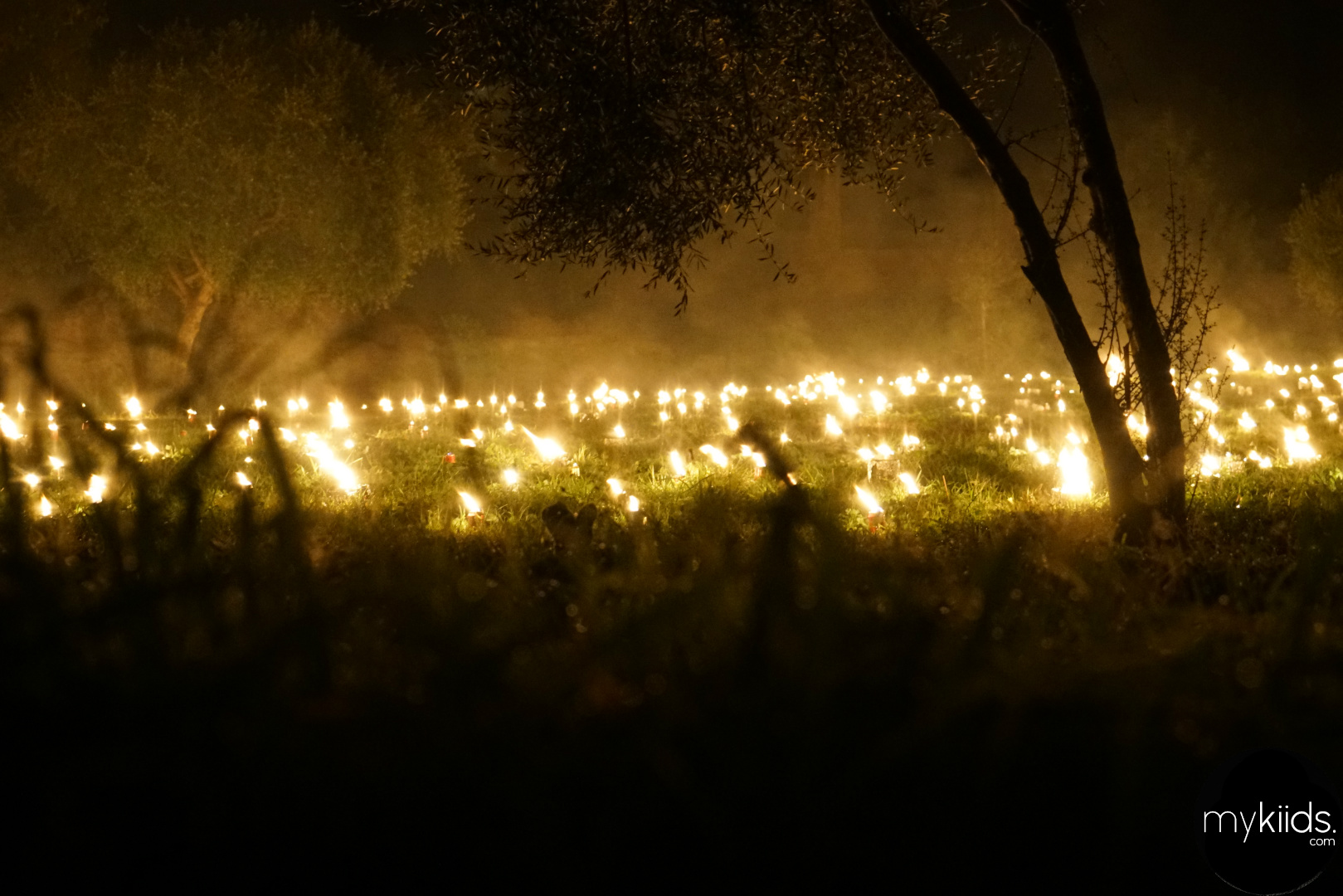 This year the Contrallum de Sineu took place on the 12th of November 2022 with a larger area then the previous exhibitions. The public lights in Sineu, at least in a part of the town, get switched off for one night only and lanterns, torches, candles and the stars become the only thing that illuminate the area from 19:00 to 22:00.

The Contrallum is a festival of light and heritage, an event that takes place in the dark. Hundreds of people stroll the candle lit pathways through the streets of Sineu to admire and reflect, with a total of eleven illuminating points that display creativity and effects and represent a specific topic uniting history and present day themes. including the changes facing villages, the houses in the area, the work and the uses of space. Along the route of the Contrallum de Sineu 2022, there were also several local participants (private houses of residents) who decorated their property, closed their window shades and doors in order to make the streets as dark as possible.

The entire pathway is lit on each side, hence, creating a beautifully lit pathway utilizing only candles in white bags. Throughout the pathway, there were specific points that represented a specific theme, along with a small billboard in both Catalan and English to divulge what the theme represented.

Apparently this year the light show extended towards the ses Cases Noves area and therefore, in order to focus on the themes at each illuminating point, shifted across the train tracks from previous years.

Arriving in Sineu by car, we were surprised by how many others were arriving as well. It seemed like a market day with the amount of visitors arriving, however there is plenty of parking throughout the town of Sineu, as it also hosts one of the largest weekly markets. Therefore you will definitely find a place to park.

From there we walked towards the train tracks next to Carretera de Santa Margalida, and this is where we saw the majority of people, trying to move towards a very narrow pathway squished in between the train tracks and the building. The crowd was very large and everyone was trying to enter from multiple directions. While we were not sure whether or not this was the “start”, or whether one could just walk in any which way, we opted to wait and go along this path as well. This “process of entry” could have been organized better with a simple signage, volunteers creating a line, (utilizing ropes or blockades) along the side of the building for people to lineup in an organized fashion to facilitate quicker entry to the narrow pathway without having chaos. It wasn’t until the crowd grew significantly larger that “organizers” started yelling into the crowd that one could also just walk up the street in the opposite direction.

Hence, this area could have been done better.

Another problem was that once people started walking in all directions, you would get heavy bottlenecks in certain areas as the pathways and streets narrowed, or people would drift to one side where the illuminated light points were (decorations), trying to take pictures, etc. It would have been a lot easier, especially for children, if everyone would flow in the same direction. However, at an event like this, that could be wishful thinking, however if everyone flowed from one place, like we mention above then it would theoretically be possible, along with volunteers along the path to move people gradually.

The walk in and of itself is quite interesting. The idea is fairly simple, yet beautiful. Candlelit pathways in the darkness, with stops of creativity from a “burning field” to decorated watering cans to a basketball display where very interesting. If you are with kids, then it is important to note that it is dark in many places and hence one needs to keep an eye out for kids.

Each stop has a small illuminated billboard describing the scenario in Catalan and English. Our recommendation would be to add a QR code to each board linking to their website with additional languages such as German and Spanish.

Overall, the event was very interesting and worth the visit. Albeit a few technical difficulties that could be easily improved, the event is one worth visiting next year as the themes change. Once all the hectic was gone, it was a relaxing stroll in most parts of the course. Sometimes even near meditation-like.

Who or what is the Contrallum?

The Contrallum collective are the organizers of the Contrallum of Sineu. It is an association that is made up of volunteers that works together with the town council and other local groups in the area. The idea of the Contrallum is one with several objectives, including the display of Sineu’s rich heritage, foster citizen and local participation within the town, promote sustainability through the encouragement and provoking of reusing materials, and to promote artistic creation.

Hence, once a year in November, the town of Sineu cordially invites residents and visitors to experience the Contrallum de Sineu.